The Will Rogers Shrine of the Sun 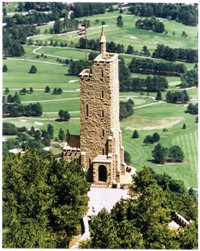 The Will Rogers Shrine of the Sun is one of Colorado Springs’ great landmarks, offering visitors an unrivaled panorama of the city and surrounding area.  In addition to the wonderful view, the Shrine has a rich history that, as with many things in Colorado Springs, began with Spencer Penrose.

In 1932, upon learning that he had throat cancer, Spencer Penrose began planning the construction of a memorial tomb on Cheyenne Mountain. Designed to resemble a medieval tower, construction of the Shrine lasted from 1934 to 1937. The tower was built with a 200,000-pound steel frame and 6,500 cubic yards of granite quarried from a single Cheyenne Mountain boulder.  The 114-foot tower is a “singing tower” with chimes and a vibraharp that can play 125 selections.

Initially, Spencer Penrose planned to name the tower after himself, but Julie Penrose convinced him to name it in the memory of Will Rogers, the popular western humorist who died in an airplane accident in 1935. On September 6, 1937, the Shrine was officially dedicated. The dedication ceremony began with a procession up Cheyenne Mountain road led by a rider-less horse.  At the Shrine, Colorado College President Thurston Davies gave an address broadcast nationally by the NBC radio network. The ceremony closed with a nine-gun salute, the “Star Spangled Banner” performed by the Cowboy Band from Abilene, Texas, and the playing of “Taps.”

In addition to preserving the memory of Will Rogers, the Shrine also honors the impact Spencer Penrose had in the Pikes Peak region and tells the story of some of the area’s most important figures and accomplishments.  A nearly life-size mural on the ground floor depicts Spanish explorer-priest Sylvestre Velez de Escalante, Lt. Zebulon M. Pike, and Gen. William Jackson Palmer. Many of Spencer Penrose’s legacies are also represented, specifically items from the Utah Copper Company, the Pikes Peak Highway, and the Broadmoor Hotel.

The Shrine is home to Spencer and Julie’s ashes, lying peacefully under the first floor chapel. Penrose’s burial ceremony at the Will Roger’s Shrine was remarkably simple. The ceremony consisted of Penrose’s casket being transported by carriage up Cheyenne Mountain and a single poem being read:

The Will Rogers Shrine of the Sun is visited by over 70,000 people annually and can be accessed through the Cheyenne Mountain Zoo, originally founded by Spencer Penrose. To learn more about the Shrine and how you can visit, click here. Much of the information in this post comes from “A Pikes Peak Partnership: The Penroses and the Tutts” by Thomas J. Noel and Cathleen M. Norman.