The Continent Comes to Colorado

Nuno Carmo came to Colorado Springs in August. As a Portuguese graduate student studying politics, he was fascinated by the local culture. First off, he didn’t see as many cowboy hats and six-shooters as he expected. Then he found that Americans ate more than cheeseburgers. And he discovered that his electric blue shoes were a little out of place amidst white-collared politicians.

And thus began a steep learning curve that would last five weeks (three in Colorado and two in Washington, D.C.) 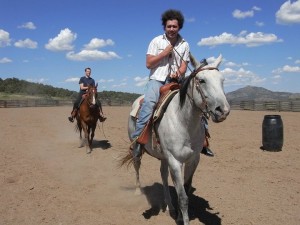 Nuno was one of three students selected for the Trans-Atlantic Junior Fellowship, a partnership between El Pomar Foundation and European universities that brings college students to the United States to learn firsthand what democracy looks like in America.

Shiny shoes aside, Nuno was not unique. His colleagues, Katie Parry of Scotland and Hubert Kubik of Poland, came with their own stereotypes in mind. They admitted to thinking before arrival that:

While Nuno found the last of these stereotypes resoundingly confirmed (we do love our trucks), the rest, he admitted after spending time in the U.S., were not. And while he was startled by some Coloradans’ negative feelings toward government, he was impressed by the diverse collaborations they used to solve their problems instead. Eric Cefus of the Catamount Institute, for example, displayed a remarkable insight into the nature of change by his bottom-up approach to environmental conservation. “Even though there was passion for what he did,” Nuno noted, “he was still realistic enough to know the most adequate way of acting and how to bring bigger change.” 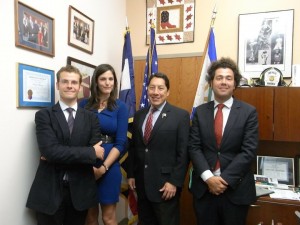 Katie, coming from secular Britain, was similarly struck by the role religion plays in American politics. A conversation about energy policy with a politically-active Christian, she admitted, “kick-started a process of mental spring-cleaning which will, I think, continue for some time.”

Not that America was all meetings and thinking, of course. Nuno talked his new friends into attending a roller derby. Then they tried out whitewater rafting, a baseball game, and the state fair. The experiences that made the biggest impression on Hubert ranged from riding horses to talking economics with two city chambers of commerce.

And it wasn’t only the visitors who were learning. Exposure to the problem-solving spirit of the nonprofit sector made perhaps the most dramatic impression on Nuno and his companions, but they made an impression on the Americans as well. Interacting with the Europeans on a daily basis provided El Pomar staff with a front-row seat observing the observers. Program Associate Stephanie South remarked, “Everyone the Trans-Atlantic Junior Fellows interacted with, including our own El Pomar Foundation staff, experienced cultural exchange and had the opportunity to learn and broaden his or her own world view.”

“I am not the same person I was three weeks ago,” Nuno reflected. “These three weeks in Colorado Springs have affected me in ways I did not even think was possible, and I can honestly say I would have happily stayed for longer.” 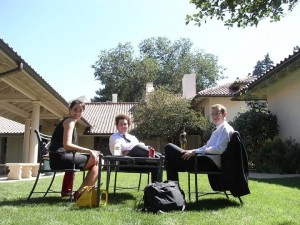