It’s not every day you hear an opera, let alone one written about your place of employment. But yesterday, El Pomar staffers listened in as student voices from the Colorado Springs Conservatory brought to life the legacy of El Pomar founders Spencer and Julie Penrose. It was entirely student-created, student-performed and student-style as they knocked the whole thing out in one week.

I had the opportunity to sit down with the students before the opera sample and hear their side of the creative process. The opera is part of an intensive summer music program for local Colorado Springs Conservatory students. They met last Monday for sessions and tours with various historians and experts to learn about the Penroses, before spending hours this past week writing the actual lyrics and music. Influenced by the Will Rogers Shrine of the Sun, Penrose House, El Pomar Foundation, The Broadmoor, the El Pomar Carriage Museum, among other Penrose legacies, the students came up with storylines and scenes to set to melodies.

Many of them had never heard of the Penroses before they started the project, but there were a few locals who had. 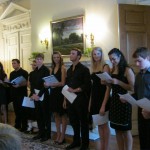 What both groups came up with, however, was the same theme: legacy. In one part of the opera that is clear, when Julie Penrose tells Spencer “legacy is more than just a word,” referring to the Penrose name. Indeed, most of what the Penroses have left behind does not contain their name, only their generosity and the students wanted to make this a strong point.

However, the students were equally excited to tell me about the humor in the opera and how they hoped it would be as entertaining as it was informative. They told me about Spencer’s glass eyeball complete with bloodshot veins, his secret stashes of alcohol during Prohibition, and how amazed they were with the life the Penroses led. They weren’t disappointed then when chuckles came from the audience when Spencer Penrose sang of his idea to build a shrine to himself, or when Julie said, “We need to talk!”

While we at El Pomar only heard a small teaser from the students’ work of art, they gave a full performance last night at Colorado College's Packard Hall. Additionally, the Conservatory is traveling to Central City Opera this weekend and will perform the production in the opera house built in 1878. The legacy will be in full force there as Julie Penrose was one of the opera company’s original founders.