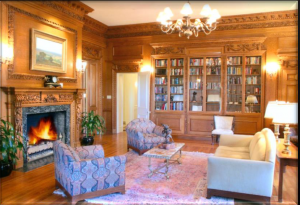 On a snowy day, sitting by the intricate fireplace in the Penrose House library, surrounded by carved oak and glass cases of antique books, you could forget the world.  Snug, warm, and architecturally transcendent, the library is designed for comfort and entertainment.  You might notice, though, if perusing the cases in the alcove of the north wall, a series of semicircular grooves marring the wood floor, a subtle indication the room conceals more than books.

Spencer and Julie Penrose acquired their El Pomar estate in 1916, with the United States on the eve of joining the First World War, and Prohibition already in the air.  The Great War saw the first tremor of Prohibition in 1917 with a wartime restriction on alcohol production to preserve grain stores.  By the time the 18th amendment put Prohibition into national effect in 1919, crowning a century-old series of national temperance movements, 33 out of 48 American states had already enacted their own alcohol bans.

Perhaps it was with foresight, then, that Spencer installed secret doors behind the library’s north bookcases when he remodeled his new home in 1916.  Spencer purchased the house  with 400 bottles of liquor included.  He soon supplemented these original bottles with  four packed boxcars of fine wine and spirits purchased at an admirable discount from a friend in Philadelphia, John Wagner, before prohibition shut his business’ doors.  Spencer and another old friend, Charles L. Tutt II, split the liquor, swearing that they would never go a day of their lives without a drink.  Behind the bookcases, an observer of the time would have found a narrow staircase to a triple-locked wine cellar and an abundance of the most elegant alcohol money could buy.

Spencer did not keep his vast liquor supplies to himself, but frequently put them at the disposal of his friends and guests.  An engraved invitation to a party at El Pomar epitomized the rollicking spirit of the Roaring Twenties.  A nearly unlimited supply of drinks sustained the Penroses’ banquets and all-night costume parties. Interestingly, even during Prohibition, these parties were legal.  Although the production and sale of ‘intoxicating liquor’ was restricted, the possession and use of preexisting alcohol by individuals and their ‘bona fide guests’ was allowed.  So vast was Spencer’s cellar that cases from his collection remained under the Broadmoor’s old outdoor swimming pool until the early 1990s. To this day, Tutt’s stock continues to supply the social Cooking Club Spencer started.

While Spencer was a drinker and a vehement opponent of Prohibition from its outset, Julie was nearly a teetotaler.  Julie abstained even as Spencer campaigned for repeal in a llama-drawn cart down Colorado Springs’ main avenues.  So great was his hatred of the 18th Amendment, he broke from his ardent Republican beliefs to support Democrats who promised to end Prohibition.  When Franklin Delano Roosevelt was elected in 1932 and set repeal into action, Penrose celebrated by opening the Broadmoor Tavern and shipping 800 cases of liquor he had stored for more than a decade on the East Coast to the hotel.  Empty bottles from his collection still adorn the Tavern walls.

Although Spencer and Julie were poles apart on alcohol, religion, and personal views, their relationship was prosperous.  Julie’s decency and common sense reined in Spencer’s wild-west ways and radical individualism.  The application of Spencer’s enormous wealth to enterprises with far-reaching social benefit, including the Broadmoor, the Cheyenne Mountain Zoo, and El Pomar Foundation, occurred most extensively during their time together.  It would have been anathema to Spencer to change his boisterous lifestyle outright, but incrementally, Julie made him a better man.  She laid the groundwork for El Pomar Foundation to serve the social good of Colorado far beyond their lifetimes.

Sitting in the serene library today, in the midst of a free conference center used by 30,000 annual nonprofit and governmental guests, you can almost hear the echo of Spencer’s jovial bellow and Julie’s gleaming laughter.  In that same space, nearly a century ago, ample libations flowed in toasts to lives well led and a benevolent legacy then only distantly envisioned.