“I’d Rather Wear Out Than Rust Out”

With both his family and Reverend Proby’s son present, LTC Thomas H. Martinez joined the group of esteemed leaders honored in the Milton E. Proby Cultural Heritage Room. To commemorate the moment, musician Bob Abeyeta played three of LTC Martinez’s favorite songs; Las Mañanitas, De Colores, and Volver Volver. In addition, leaders from the ELD selection committee spoke about the impact the Emerging Leaders Development Program has had on their ability to serve their communities. The event showcased not only LTC Thomas H. Martinez’s many successes, but the expertise of many leaders that keep Colorado Springs so vibrant. 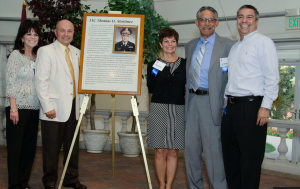 Born in Sopris, Colorado, LTC Martinez graduated from Huerfano County High School in 1933 and was drafted into the U.S. Army in 1942. While in the military, LTC Martinez served during WWII and the Korean War. While in Korea, LTC Martinez discovered the importance of giving back to the community, even if his presence in the community was only temporary. Experiencing firsthand the value the local hospital provided to soldiers, LTC Martinez began raising funds to ensure the hospital could continue its work.

Upon retiring from the military and settling in southern Colorado, LTC Martinez dedicated his time to increasing access to education, specifically for Hispanic youth. With the belief that education is a birthright of every American, he was instrumental in establishing the Latin American Educational Foundation (LAEF), a fund that aims to reduce barriers for Hispanic students in attaining college degrees. LAEF is a one-stop center of information, providing guidance to parents and students navigating the college application process. Through his career as a civil servant, LTC Martinez has inspired and enabled countless underprivileged youth to continue their education. The Emerging Leaders Development program is proud to induct such an influential community leader into the Milton E. Proby Cultural Heritage Room.

To recognize in perpetuity LTC Martinez's dedication to education, in 1988, a district 11 elementary school was named in his honor, LTC Thomas H. Martinez Elementary.  In addition, Martinez served as Chair of La Raza Unity Council, President of St. Vincent De Paul Society, and President of the Colorado Springs Chapter of the American G.I. Forum. In 1978, he was the recipient of the “Hispanic Employment Program” from the U.S. Civil Service Commission. He lived a life of tireless service exemplified by a favorite quote, “I’d rather wear out than rust out.”