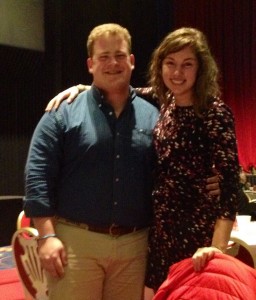 Tuckman’s stages of group development (forming, storming, norming, performing) always seemed a little cliché to me. Maybe it’s because all the stages rhyme. When I look back on the first five months of my friendship with Matt Weigel, Tuckman’s stages are right on. Matt and I met on day one of the Fellowship. Matt was wearing a pink CU Buffaloes tie, a bold move, but being from Boulder I liked it. During our orientation hike, Matt and I talked about politics the entire 2-hour trek and realized we both love politics, but don’t vote the same way.

Bring on the storming.

Fortunately, a little sarcasm and a desire to engage rather than shut down when learning of the other's opposing views, led us pretty quickly into the norming phase. Matt and I were given our program assignments, and to our surprise we were assigned to all of the same programs; literally all of them. Additionally, many of our programs involve discussions about leadership, politics and current events; we staff Forum for Civic Advancement, which creates a platform for civic engagement and discussion, and last week, we spent four days with 37 state legislators from 12 western states for the annual Western Legislative Academy conference.

Through the first five months at El Pomar, Matt and I have planned, debated, discussed, and put out a few small fires together. I am learning how to talk to someone who may not agree with me, how to assume best intentions, and also how to build consensus. Because though we vote differently, you can be sure that Matt and I will always vote, and when we vote, we’ll be thinking about the issues, and not the person. Plus, I’m going to need a campaign manager when I run for office, and I can’t imagine a better one than Matt.