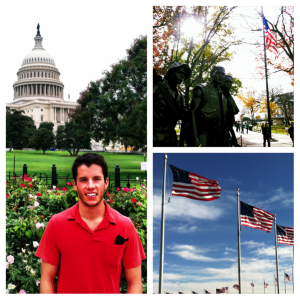 Readers, I have finally grasped the meaning of it.  I have truly come to that pinnacle of understanding that swells through the pores of every inch of my being. The light bulb has clicked on.

What do I understand? My friends, I am talking about the one word I have always been told to appreciate, yet have never learned to appreciate.

Just like many Americans, I used to associate the word “freedom” with flags waving, eagles flying, and rockets red glaring, but I did not have a deep-rooted understanding of what it really means to be free – the F-R-E-E kind of free.

What gave me a deeper understanding of what this powerful, yet hard-to-grasp word means? A two-month experience in Washington, D.C. that taught me what it really means to live in a free country.

Through our work as Fellows, Sabrina Ragaller and I had the opportunity to work in Washington, D.C. for the American Council of Young Political Leaders for the past two months. We assisted ACYPL with its 2012 Elections Exchange program. The program hosted 70 delegates from 15 different countries in the U.S. during the presidential election, with the goal to show them how our democratic and electoral processes function.

While in America, the delegates attended meetings with grassroots organizations, politicians, media outlets, election boards, and much more. Some of them even had the opportunity to attend rallies for President Obama and Governor Romney.

Through my travels with the delegates, I learned more about my country than ever before. I felt like “I got into the thick of it,” as my grandfather says. While the entire experience was incredible, one particular moment stands out where I learned what it really means to be “free.” The moment came late one night as I enjoyed a beer with a foreign delegate after a long day of meetings with political pundits and campaign offices.

We sat down at the bar, not as an American and a foreigner, but as two people who wanted to learn about one another. The conversation was fun and light-hearted up until the point I asked her about her future. Her response was simply, “I don’t know.” A typical answer from someone in their mid-twenties, but as I pressed for more, I found out the sad reality of why she didn’t know what she wanted to do.

It was not that she was confused about her passions or disengaged with the world. It was because of her country. She told me that she didn’t know what she wanted to do because the corruption in her home country meant that what she could pursue today could be gone tomorrow.

Her statement really shocked me. That night I could barely get any sleep. I was stuck on the foreign idea of not having the freedom to do what I wanted to do with my life.

It hit even more of a nerve the next morning, as I helped this delegate, my new friend, get to the airport to go home. Tears began to stream from her face, despite how hard she tried to hold them back.

This is when I came to understand that word. I had seen all of the political mudslinging of the last few months up close. I had felt all of the angst and fear and hope that bubbled over during this election cycle. Yet, it hit me then, the only thing that mattered was one thing: freedom.  The freedom to go and cast a vote for the party I think has the best ideas. The freedom to have my voice heard without the fear of government to silence me. And the freedom to pursue any life path I choose.

It seemed that every other worry that I had before this realization seemed to fade away because I am 100 percent, whole-heartedly, gloriously free. There are seldom things more beautiful than this.

Freedom, ladies and gentlemen, is what I am thankful for during this holiday season.