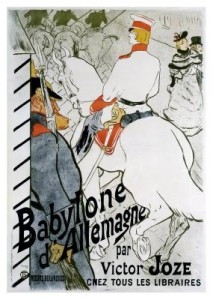 In 1891, on the muggy avenues of a changing Paris, a young artist’s new lithograph posters appeared for the first time. A painter by trade, his colorful and curvilinear prints were elegant in their simplicity, but most of all, provocative. His Paris was transforming; his landscape having been altered two years earlier by a spire and a windmill; the spire was the steel latticework of the tallest building on earth, the Eiffel Tower; the windmill was the infamous nightclub, the Moulin Rouge.The hall of extravagant and lascivious entertainment became the focal point of the young painter. The Moulin Rouge was the subject of this first poster, and of many thereafter, plastered by the thousand on the walls and doorways of the dirty, romantic city.

The artist was Henri Marie Raymond de Toulouse-Lautrec-Monfa, known now as Toulouse-Lautrec. He was a short man standing at the intersection of huge social currents. Born to aristocrats and friend to artistic giants such as Emile Bernard and Vincent Van Gogh, he lived a life inspired by the broad strokes of impressionism, the embracing, harmonious curves of art nouveau, and the unconventional, vagabond bohemian lifestyle. His work was also inspired by strong Japanese artistic influence. In 1891, Lautrec began crafting the bright posters that he is best known for, characterized by flat planes of color and simple curving figures crafted in bold lines and silhouettes.

Lautrec’s lively posters gained popularity immediately, and were collected throughout his lifetime.Before his premature death in 1901, he produced 31 distinct lithographs. His fame continued to grow well beyond his lifetime and a museum showcasing Lautrec’s work was opened by 1922. 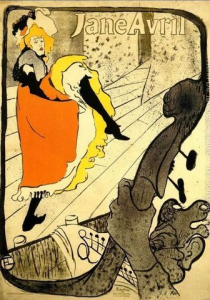 In the mid-1950s, seven of Lautrec’s prints showed up at a small art gallery in New York. At thesame time as their display, El Pomar Trustee William Thayer Tutt was visiting the city for aKennecott Copper Board meeting. The coincidence proved fortuitous for El Pomar Foundation.Tutt, an avid art collector, purchased all seven prints for a total of $350, and brought them back for display in the tavern at the Broadmoor Hotel in Colorado Springs. The prints depict the MoulinRouge dancer Jane Avril, two advertisements for novels, two lively portraits, and an advertisement for confetti.

By 1995, the posters were beginning to show signs of smoke damage, and were moved from the hotel to the Penrose House Conference Center, where they now reside in a meeting space named in honor of the visionary artist who created them.

El Pomar Foundation values history and tradition. We are proud to act as steward to the legacy of the Penroses as we pursue their mission to improve the lives of Coloradans every day. Similarly, we are proud to preserve and display the art that came to us via the Penroses’ wealth and collections.

Lautrec’s posters are a piece of global artistic history. We are proud to act as stewards for these iconic works now, and into the future.

Replicas of the prints still hang in the Broadmoor tavern, and the originals can be viewed on self guided tours of Penrose House Monday –Friday during business hours, or by reservation on guided tours. Both services are available at no cost, but may be limited by the availability of the Lautrec Board Room. Please call 719-577-7001 in advance to check availability.