Educating Our Youth, Get In There!

I had not walked into an elementary school classroom for at least 10 years until this past Thursday. As I strolled down the halls of finger paintings, science projects, and PTA posters with the 4th grader who was escorting me to her class, it hit me. I was on the front lines.

Education reform seems to be the talk of the town lately. And when I say town I mean nation, and when I say lately I mean for the last 10 years. Education is one of the topics I would say Fellows at El Pomar Foundation discuss the most in our out of office debates and discussions.  The conversation might start off with, “where are we going for dinner?” and lead into, “everything is getting more and more expensive these days” and continue to, “did you know that when my mom went to college tuition was only $600 a year?!” As you can only imagine, the conversation usually then takes a turn and we end up at primary and secondary education reform.

Often, someone brings up the point that “teachers are not paid enough!” and another exclaims, “My German friend in college knew five languages before the sixth grade!”  It seems that everyone has an opinion about education reform in the U.S. The topic is so important that former Secretary of State Condoleeza Rice stated that it is a matter of concern for national security.

That’s right, folks. The Department of Defense estimates that 75 percent of young Americans are not eligible to serve in the military because they didn't graduate from high school, are overweight, or have criminal records.  Additionally, in the report released this past Tuesday by the Council on Foreign Relations,  "among recent high school graduates who are eligible to apply, 30 percent score too low on the Armed Services Vocational Aptitude Battery to be recruited."

These are scary numbers.

So outside of the debates about state funding, limited resources, and increasing academic standards, how can you get involved to improve education in your community? I would suggest volunteering for one of the many nonprofits with a mission to do exactly that.

Last week, along with other El Pomar Foundation Fellows, I had the opportunity to volunteer teach 4th graders at Pauline Memorial Catholic School for Junior Achievement. The mission of JA is to inspire and prepare young people to succeed in a global economy, and it seems to be paying off in the classroom. External evaluators found that elementary school students who participate in JA demonstrate significantly higher critical thinking and problem-solving skills than their counterparts.

Overall, the experience was a rewarding one. Darcy Struckhoff and I taught the students about geography, regional resources, and entrepreneurship during this full-day volunteering session. The children were engaged and together we had a lot of fun. There were moments during the day when I would work with a child who was struggling with the material and then, all of a sudden, eureka, it all came together. You could see the excitement and a smile that said, “I got it!”

What I got out of this experience is that there is something refreshing and rewarding about teaching something new to a child. Not only do you have the opportunity to empower someone with knowledge, but you are also improving and taking pride in your community. As cheesy as it may sound, the fact of the matter is that you ARE making a difference.

Now, what is the greatest thing about this, other than assisting the youth in your community to become more empowered? Most companies are willing to sponsor employees to take the day off to volunteer for schools that are associated with JA.

So, here is a challenge to match every debate about who should do what with education with a leap into the classroom ourselves. As I stood in front of the classroom of these eager 4th graders, there was not one who did not want to learn. 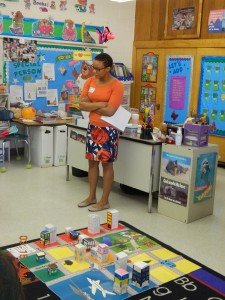