A Historical Perspective: Final Stops on the Rock Island Line

In 1847, steel tendrils were sprinting across the United States, overthrowing canals and eventually steamships as the primary conduits of American industry. The country was fighting the Mexican-American war, training ground for heroes and villains later to be immortalized in the Civil War. The romanticized outlaw Jesse James was born in Clay County, Missouri, and the Chicago & Rock Island Railroad Company was chartered in Illinois. 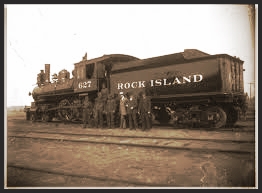 A quarter of a century later, the renamed Chicago, Rock Island & Pacific Railroad was introducing the first elegant dining cars to passenger trains and was victim to the first train robbery by the ex-Confederate Jesse James. By 1889, Jesse was in his grave, and the iconic Rock Island Line reached Colorado Springs.

At its height, the Rock Island Line would include over 8,000 miles of track interconnected with other companies and transcontinental networks. The construction of tracks, lines, freight yards and grand stations employed an enormous amount of labor, ranging from ditch diggers, to mechanics, to the skilled artisans who carved and inlayed mother-of-pearl motifs in the observation cars.

One of these artisans, a railroad veteran named Andrea T. Gavell, developed a method in the 1880’s for creating beautiful paintings on glass inlaid with mother-of-pearl. His technique, initially applied on clock faces, soon spread among other craftsmen and resulted in the production of numerous plate glass paintings of the Colorado Rock Island route. In the decades around turn of the 20th century, the cartoonish side-view paintings of trains crossing in front of mountains could be found as advertisements in depots and hotels around the country.

It is unclear how many “pearl train” paintings were initially made, but their popularity was significant. Two were even sent to the 1889 Paris World Exhibition for the opening of the Eiffel Tower. By the turn of the century, the Rock Island line commissioned 50 additional paintings at a
price of $50 as gifts to partner hotels. Each hand painted glass sign depicted a unique combination of engines and cars.

The golden age of passenger railroads rode out with the 1920’s, with only brief respites thereafter. The continuous decline of the Chicago, Rock Island & Pacific Railroad Company diminished the company to ramshackle condition with frequent derailments in the 1970’s. Finally, after 133 years of operation, the company buckled in 1980 in the largest railway company abandonment until that date. Nonetheless, much of its track bears trains to this day, overseen largely by the Union Pacific Railroad. The original Rock Island route from Chicago to Joliet, Illinois still operates as a commuter train.

Only a few of the enchanting paintings from the heyday of the Rock Island Line exist today, with the location of only a dozen known nationally. We are lucky enough to house two of the gleaming locomotives at El Pomar Foundation; one resides at our Penrose House Conference Center, and the other at our offices at 10 Lake Circle, beside the Broadmoor Hotel.

These paintings harken back to not only the golden age of rail, but to the time of exploration and innovation when Spencer Penrose built the fortune he would entrust to El Pomar on behalf of the people of Colorado. They are a reminder both of our national history, and our personal history. The next time you visit El Pomar, take a look around for these marvelous records in paint and pearl. What you see won’t disappoint.