A Day at the Circus and a Tribute to Our Military

With five bases within a 40-mile radius, it is safe to say El Pomar's hometown of Colorado Springs is a military town. And the military is a vital component of the Colorado Springs community, helping drive the economy and shape the area's future. The strong military presence is visible throughout the Pikes Peak region, where it is common for civilians to interact with uniformed men and women on a daily basis.

Their faces are a constant reminder that others are still far away, representing our country and our freedom across the world. Recognizing the sacrifices service members and their families make, the trustees of El Pomar Foundation, in conjunction with the Foundation's internal Ackerman Fund, World Arena Community Fund, Joseph Henry Edmonson Foundation, and the Military Family Assistance Fund of the Pikes Peak United Way, partnered with the Ringling Bros. and Barnum & Bailey Circus to show local soldiers and military families how grateful the community is for their service.

On Saturday, June 9, El Pomar hosted the sixth annual Military Family Appreciation Day at the circus. For this special event at the Colorado Springs World Arena, free tickets to The Greatest Show on Earth were distributed exclusively to service members and their families.

“In honor of the sacrifices endured by our military families, we are honored to host these brave and courageous families as our guests," El Pomar’s Director of Military and Veteran Affairs Terrance McWilliams noted. “It is a tribute for all they have done and continue to do on our behalf.” 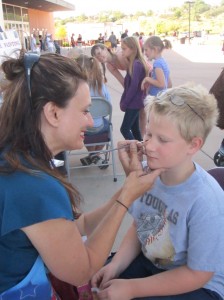 Before the show started, one mom hid her daughter’s eyes as they waited in line. The circus trip was a surprise and she didn’t want a stray clown to spoil the ‘aha’ moment awaiting inside.

McWilliams summed up the best part of the day in two words: the expressions.

Once the show started and the World Arena was packed, the smiles of delight and wide eyes of surprise said this was, indeed, a special day for many.