Will Rogers Shrine of the Sun

Will Rogers Shrine of the Sun, an operating legacy of El Pomar Foundation, is located on the side of Cheyenne Mountain at nearly 8,000 feet above sea level. Just above the Cheyenne Mountain Zoo, it provides an impressive panoramic view of Colorado Springs and the surrounding area. Spencer and Julie Penrose, founders of El Pomar Foundation, commissioned local architect Charles E. Thomas to design the monument.

Completed in 1937, the Shrine stands 114 feet high and was fashioned from Cheyenne Mountain granite quarried 700 feet away from the building site. It was constructed entirely without nails or wood, and is instead bound together by 200,000 pounds of steel and 30 wagon-loads of cement.

Will Rogers Shrine of the Sun was named in a two-part tribute. The first is to actor, philosopher and humorist Will Rogers after his untimely death in a plane crash in 1935. The second is in appreciation for the sun, captured each morning and evening as it illuminates the tower’s stark angles.

The Shrine houses several notable cultural attractions, including a 340-square-foot mural by renowned Santa Fe artist Randall Davey. The mural depicts the history of the Pikes Peak region and was commissioned by Spencer and Julie Penrose in honor of their love for the local area and its rich history. Additionally, photographs of Will Roger’s life are displayed in the stairways and enclaves.

The tombs of Julie and Spencer Penrose can be found in the Shrine’s chapel, accessible through a separate entrance in the lower level of the Shrine. In the 1940s, Julie Penrose decorated the chapel with 15th and 16th century religious relics.

Perhaps the Shrine’s most iconic feature is its sophisticated instrument. It chimes every quarter hour and on the hour and plays a musical program every day at 10:00am, 12:00pm and 5:00pm. This music, which has played since 1937, can be heard throughout the neighborhood.

The Story of Will Rogers Shrine of the Sun 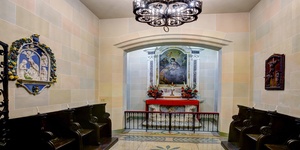 Will Rogers Shrine is uniquely situated on the side of Cheyenne Mountain. Visitors should prepare for unpredictable weather conditions and bring their own water. The Shrine’s interior rooms, the chapel and restrooms are only accessible by stairs. The walk from the parking lot to the Shrine is approximately 50 yards uphill.

Professional or amateur photography, or private events of any kind, are not allowed on any of El Pomar Foundation’s historic properties, including Will Rogers Shrine. 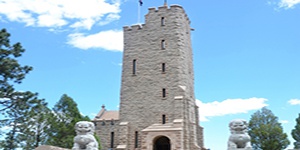